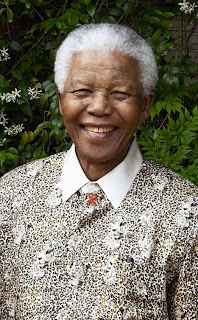 The world is in mourning. Nelson Mandela, human rights leader, anti-apartheid icon and former president of South Africa, died on Thursday, Dec. 5. He was 95.

South African president Jacob Zuma, who confirmed the Nobel Peace prize winner had "departed" in a statement delivered Thursday afternoon, said South Africa had "lost its greatest son."
"What made Nelson Mandela great was precisely what made him human," Zuma continued. "We saw in him what we seek in ourselves."

Mandela passed away with family members around him at his home in the Johannesburg suburb of Houghton just before 9pm, after more than a year of ill health caused by a lung infection.

" Zuma announced a period of national mourning and said South African flags would fly at half mast around the world until Mandela's state funeral was held in the coming weeks. His body is expected to be taken to the capital Pretoria, where he will lie in state. "Nelson Mandela brought us together, and it is together that we will bid him farewell," Zuma added.