As a tribute to Sachin Tendulkar, the Cricket Association of Bengal (CAB) has printed the Master Blaster's photo and his autograph on the Test match tickets for his 199th game against West Indies. It is for the first time in India that a player's image has been printed on a match ticket. 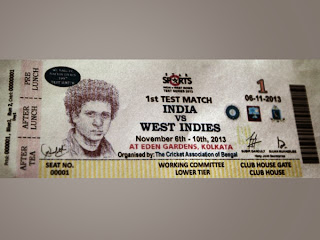 The 40-year-old's straight-drive, cut-shot, celebration of a century, portrait and a close-up of his shot are captured on tickets.
"After all, these two Tests are going to be exceptional and high on emotions. We want to take this match ticket to the level of being called a memorabilia," CAB treasurer Biswarup Dey had said last week in "DNA".
"If this happens, it is going to be the first time in the history of Ede Gardens that a ticket will carry an image of a cricketer playing in the match," he had said adding, "We would have done the same for Sourav (Ganguly) but unfortunately his last match was not here."
India will play West Indies in the first Test of the series at Eden Gardens from November 6. Tendulkar's last and final Test will be in Mumbai's Wankhede Stadium from November 14 to 18.
If u seems it as a good stuff, please like this page and share it with your friends. Also click here to Like our facebook page  to get all updates